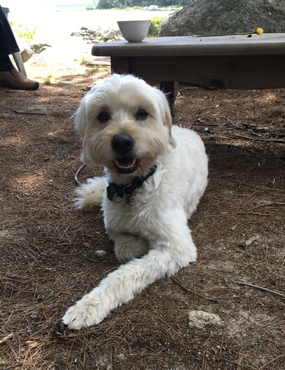 On a family trip to Costa Rica in 2019, Mandy and her family went on a zip line adventure. Mandy learned that this zip line, and a nearby hotel, were run by a family as a means of supporting their animal sanctuary. The hotel, Lands in Love, is the main source of income for the sanctuary called Animal Love Rescue Costa Rica, which was started about 15 years ago by a group of Israeli friends who had moved to Costa Rica. The sanctuary and shelter are home to around 700 animals of all shapes and sizes. Mandy wanted to spend more time there and learned that you could stay there as a volunteer. An ODND trip was inspired….

Mandy and Martie, ODND Board Members, and Michelle and Kristen, ODND volunteers, took to the skies in November 2019 and landed in Costa Rica where they spent a week volunteering at the sanctuary and learning about the people and animals there. The ladies wanted to offer more help, so we tried to organize a dog or two to fly back to the states with them, but only certain airlines will do this and their flights were not with those lines. So, it went on hold until better arrangements could be made.

Arrangements were made for two dogs to make the long flight north in December. The dogs, Eili and Jami, would fly out of Costa Rica and make the long trip to Boston, MA where volunteer Samantha (aka Sam) would meet them after driving down from Maine. As usual, there were flight delays and the day turned out to be a long one! Luckily, Sam had booked a room at the dog friendly Boston Harbor Hyatt, so Eili, Jami, and Sam spent the night in the city before continuing north to Maine, where the two pups would find temporary foster with Martie until forever homes could be found.

And find their homes they did! Jami, now Sancho, found a wonderful home who loves him very much, keeps him groomed, and can’t believe their luck. Eili found a home with a great family with a canine sibling and even a cat friend who she loves.

Pictured: Eili & Jami heading for Maine, Sam saying goodbye after a long & fun adventure, Martie picking them up for their next leg of the trip, Eili in foster, Sancho with his new “do”.