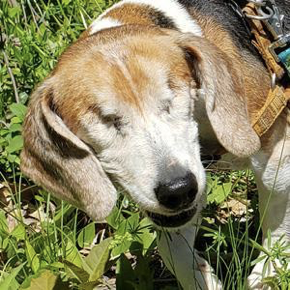 Dixie, who was originally from Georgia but came to Maine to the Animal Welfare Society. She had glaucoma which had caused her to need both eyes removed. She was adopted from AWS but her owner passed away and she found herself searching for a home again. ODND was able to help her find one.

Beefy & Mya came to Kennebec Valley Humane Society after living in an outdoor kennel for years. Mya is Beefy’s mother and the shelter wanted to keep them together. Both dogs had some health issues resolved while in the shelter and then, with networking help from ODND, found their adoptive home. Now they have a family complete with kitty, canine, and kiddo siblings!

Pete came into the shelter at 15 because his owner had advanced dementia and could no longer care for him. He spend time in a shelter foster home and then with ODND foster Jess until he was placed in a wonderful adoptive home with several other “littles” like himself. He is love and part of a sweet, tiny pack of pooches!

In March 2019 Mandy, ODND volunteer Samantha, and their friend Amber took a trip to New Mexico to volunteer at a couple of animal sanctuaries in the area: Kindred Spirits and Heart and Soul. Through this trip, we learned of the great need for support in this area. Upon returning, Mandy continued to keep a connection with these two sanctuaries, offering ODND’s help when there was a need.

Around July of 2019, ODND made a connection with the Stray Hearts Animal Shelter in Taos, New Mexico. They were looking for help with Doris, a 13 year old German Shepherd who had been found roaming the streets as a stray. Doris was microchipped, but when the shelter called the number, the person denied ever having her leaving them to believe she had been dumped in her old age. ODND was able to network sweet Doris and an couple in Colorado who already had a Shepherd brought her home. Doris was the first of many dogs ODND has been able to partner with Stray Hearts on and we look forward to continuing to help dogs in New Mexico find new homes.