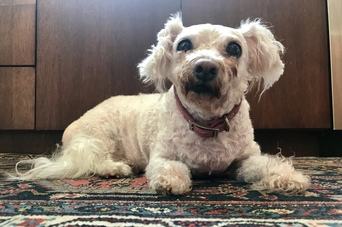 Some success stories from Colorado!

Fletcher arrived at the Adams County Animal Shelter (now Riverdale) in overall bad shape, with muscle wasting, terrible teeth, and what was thought was likely cancer. Fletcher went into fospice (hospice foster) with ODND foster Michelle and settled right down in the first comfy bed he could find. The plan was that he would stay with Michelle for the rest of his days, but with love and care and some physical therapy and aqua-therapy from Canine Rehabilitation and Conditioning Group Fletcher began to improve. Then came the best news! He got adopted! His new family has a passion for old dogs and his mom is trained as a vet tech. Fletcher moved into his new home, would be able to continue his PT, and be loved for the rest of his days.

Dorothea, Dory for short, also came from Adams County and needed a foster while she waited for surgery. She into foster with Mandy. The biggest concern were her several mammary masses which needed to be removed and tested to determine if they were cancer. Mandy learned she was sweet & affectionate and also found out Dory made what could only be described as “dinosaur noises” when she was separated from her people but knew they were still in the house. Dory (nicknamed “Little Bit” by her foster family) found out her masses were benign and was soon after adopted into a lovely home where she would have a new mom and another little canine sibling.

Bombona, affectionately nicknamed Lamby, was another Fisher foster from Adams County. She was bought as a gift for someone and brought back a year later because her owner couldn’t care for her any longer. She was very matted and has some medical issues that needed attention. Her needs were taken care of while in foster and then she was ready to be adopted. Her adopter turned out to be her foster mom’s cousin who drove from St. Louis all the way to Colorado to make this adoption happen! Bombona was thrilled to have a new home.

Buster Brown found himself surrendered due to a move and this shy, mellow guy found himself overwhelmed in the shelter environment. He went into foster through the shelter, but he was not fond of his canine foster sibling. Mandy also tried fostering Buster, but it became clear he could not live with cats, so he again returned to the shelter. Buster waited months without much interest. He was having a difficult time finding a home because he could not live with cats, was dog selective, and looked like a pitbull in an area that had long had a ban on the breed. But his luck finally turned and Buster, now Theo Atticus, hit the jackpot when a shelter volunteer dog walker decided to give him a home. The last hurdle was the meet and greet and Theo got along great with their dog. It was settled and Theo was adopted into an amazing home!

Tara came to ODND through a request from her current owner who had been diagnosed with an autoimmune condition and could no longer have a dog at home. In a previous home Tara had experience neglect and abuse and had developed a fear of men, but her current owner told us she could be won over and Tara was treat motivated and would work for food. Though ODND networked her, it turned out her owner had to surrender her, so Tara went to the shelter then into foster with ODND foster Michelle. We learned a lot about Tara while she was in foster and, after several months of networking her and giving her love, Tara was adopted!