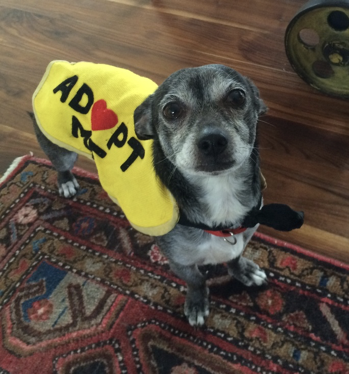 Say hello to some of our early success stories! These seniors found their happy-ever-afters in 2016 and 2017.

Snoopy found himself at the shelter as a stray and spent a short time with Mandy Fisher as a foster so she could learn more about him. Mandy described him as a “total character” and learned that he could do well with dogs, cats, and older kiddos. Snoopy was quickly adopted after he was seen in a networking Facebook post ODND made for him.

ODND networked Mocha, originally Mom, for Pope Memorial Humane Society. Mocha was both hearing and sight impaired and, after spending 10 months in the shelter needed to find a home who could shower her with love and give her comfort. ODND foster mom Dawna Turchon went to meet her and took her home for long-term foster. Dawna fell in love with Mocha and gave her a home for the rest of her days.

Ceasar came into the ODND network through Somerset Humane Society. He was surrendered to the shelter in very poor condition and begun to succumb to stress in the environment. He was dealing with various health conditions which included being covered in fleas, fur loss, lumps, yeasty skin with open sores on his neck, and lame back legs that turned out to be torn ACLs in both legs. A home would be a better place to manage these many needs so Ceasar went into foster with Mandy. After a couple months in foster, Ceasar was relaxing and healing. And once he was more himself, he also found his new mom, a woman who had just lost another senior dog and was ready to welcome another.

ODND networked Charity for Midcoast Humane Society (then Coastal Humane). Charity came in with no history and was suffering from very bad arthritis. She was stressed and uncomfortable in the shelter and was looking for a comfortable place for her aching body. Foster Amy Leonard, who is now also an ODND Case Manager, took Charity home for short-term foster. Charity settled right in and Amy and her family decided that Charity should stay right where she was until her forever home came along. It turned out, she didn’t have to wait long for that home. Charity went into a foster-to-adopt situation with her new family, who changed her name to Shelly, fell in love, and made it an official adoption.