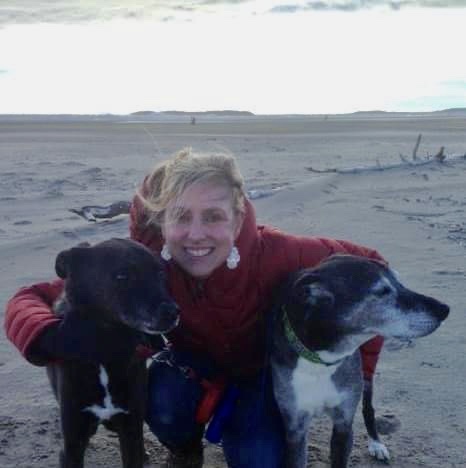 The story of Old Dogs New Digs begins with our President, Mandy Fisher, and her passion for old dogs. To understand this passion, you have to start with Mandy’s first dogs, Lobo and Tickers. Mandy got her first dog, Lobo, when a coworker found him running stray in New York City. She adopted him immediately and took a crash course in dog ownership! Lobo was a very exuberant young dog and he quickly became Mandy’s best friend. This friendship lasted for 16 years and changed the course of Mandy’s life starting her on the path toward her passion of working with animals.

After Mandy married her husband Brannon, she decided it was time for a second dog. Living in California at the time, she found Tickers through Second Chance Rescue at an adoption event. He was a few years old when Mandy and Brannon adopted him. Tickers had been born in a shelter, was adopted, and then returned several years later. Mandy remembers him as a quirky guy, very nervous, and one of a kind! He joined their newly growing family as they settled into their first house. As Lobo and Tickers grew into seniors, Mandy learned that most senior dogs exude the most wonderful qualities. She only adopted seniors from that time on.

Years later, when Tickers and Lobo were much older and Mandy and Brannon now lived in Maine with their two daughters Waverly and Layla, Mandy found herself volunteering at Maine animal shelters. Through this, she came to realize there was a need for foster homes for senior dogs and she began fostering these dogs! Between September of 2015 and March of 2016, before ODND came to be, Mandy fostered 6 senior dogs: Archie, Lucy, Sasha, Wilma, Ruby, and Sparky. Meanwhile Mandy also began reaching out to friends about starting a nonprofit. She learned that many people shared her passion for senior dogs. The process of starting a nonprofit senior dog organization began in 2016.